"Actual use of the device on antenna measurements and adjustment of a transmatch were not, however, nearly as fruitful. Adjustment of a transmatch to obtain a measured 50-ohm resistive impedance with a 21-MHz antenna system did not coincide with the adjustments to achieve minimum swr meter readings. Similarly, we found that the familiar Heath dummy load did not appear to be close to the 50-ohm design value at the higher frequencies. Somewhat perplexed at this point, we fell back to consider the next step.
K2BT mentioned evidence of calibration shifts when using the device at higher frequencies and this seemed to be related to our experience. We also began to suspect that our knowledge of the impedance of carbon resistors which we had been using to evaluate performance of the bridge was not satisfactory.
[...]
These data were mostly concentrated at the higher frequencies (21 and 28 MHz) where problems, if encountered, were expected to be most pronounced. Table 1 indicates some interesting consistencies as well as some interesting anomalies. The noise bridge nearly always indicated a more inductive (smaller) Cp than the RX meter.
Here the error was not only capacitive but also extremely large. There was also a tendency for the noise bridge to indicate a higher than correct value for Rp, particularly for higher values of load resistance.
[...]
We find it very interesting that our noise bridge also indicated roughly this value of shunt inductance for these resistors. Note, however, that the readings are incorrect!
In general, our findings indicate that composition resistors above 50 ohms exhibit relatively small values of shunt reactance. In fact, these are handy devices for use in calibrating the noise bridge as we shall explain later.

We were basically dissatisfied with the performance of this latest noise bridge. We think it is fair to say that our unit was probably as good as those made by either YA1GJM or K2BT. Indeed, as pointed out above, there appear to be significant correlations in the way our unit performed with the descriptions provided by these authors. Therefore, it seemed probable to us that some systematic errors were inherent to all these units. This prompted us to vigorously attack the problem of accuracy improvement.

We could easily fill this entire issue of ham radio if we tried to relate, in any detail, all the avenues pursued in trying to improve noise bridge accuracy. A total of six different units were built with variations in each which we thought would be helpful. Many of our initial recipes for improving accuracy turned out to be blind alleys; others showed promise but did not provide the desired improvement. In the end we found four distinct design changes which definitely improve the performance of the instrument.

To understand this point, imagine small fixed capacitors from the primary circuit to the secondary circuit. Since the dot ends of each winding are physically near each other, then you expect the reference side of the secondary circuit to be most tightly coupled to the ungrounded side of the primary, whereas the unknown side would be more tightly coupled to the grounded part of the primary, circuit. It is not difficult to imagine rather significant unbalancing effects from this unbalanced capacitive coupling - particularly so at the higher frequencies.

Fig. 3 schematically shows the recommended transformer configuration.
The toroid is wound in a quadrifilar configuration. The additional winding serves to balance the primary to secondary circuit capacitive coupling. Note that one end of this primary circuit is left floating. To achieve the most perfect balance, it should be tied back to ground through an impedance equal to the driving impedance of the amplifier stage. However, from a practical standpoint, our results indicate no measurable improvement in trying to simulate this amplifier impedance with various terminations. Hence, we recommend leaving the other end floating as shown in fig. 3.

Note also that a grounded electrostatic shield is installed between the amplifier and the toroid. This serves the same purpose as above, reducing stray capacitive coupling to the secondary circuit. These are two of the four improvements we made, and in retrospect it is clear that the quadrifilar winding is the more important improvement.
Ground loops can easily exist in rf circuits. Unfortunately, they are difficult to diagnose and their effects on circuit performance are sometimes difficult to predict.
We had observed strange behavior in several of our early noise bridge models which we now ascribe to this phenomenon. " 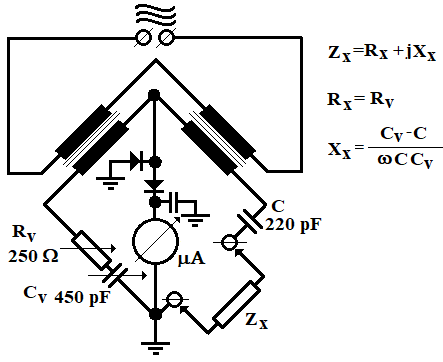